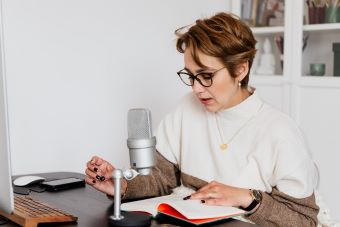 Remember when the late Helen Reddy did her part to boost gender equality through music back in the 1970s? You know the song: “I am woman, hear me roar, in numbers too big to ignore…” Now that the earworm is in place, let’s explore how female voiceover is used today.

A Woman’s Touch is in Vogue

Listen closely to a radio or a television commercial. Is the voice you hear a male or a female? Ten years ago, the answer may lean toward men but now female voiceovers are more common. That trend is evident in the membership numbers posted by the organization Voices, showing female membership rose 60 percent since 2015. Job openings climbed 24 percent. Voices also surmise that the demand for female voiceovers will surpass that of men within four years.

What creative folks and top brass are recognizing is the response that audiences have to a female voice. Maybe it’s because that could be your mom giving you advice, or perhaps it’s the soothing manner in which a woman can deliver a message. Whatever the reason, the voiceover industry is hungry for female talent.

Women make many of the buying decisions in most households so it makes sense to have them relay your message. As powerful as a women’s pull is on a consumer, we also live in an age of diversity. The listening public no longer believes that only male voices can help them decide to buy a video game, join an organization or purchase a new appliance.

Advertisers have found that women possess a knack for in-show narration skills to reach those who watch animal shows or mysteries. On the radio, the healthcare and travel industries love to work with female voiceover professionals.

Seniors can touch an entirely different audience and reach retirees with comforting tones in messages about Medicare and wellness. Dating sites will hire a mature female voiceover actor with a flirty tone, as well as a younger playful voice to entice single moms to log on.

The internet has become a popular option for female voiceover work. The Voice Realm, an online voice casting portal, found that 66 percent of those polled prefer a woman’s voice when watching videos online. On-hold messaging is another area where women appear to outshine men. A calming, friendly tone works so well for Apple, that Siri was once only a women’s voice.

By grabbing the attention of a consumer, the female voice is the answer for many companies selling goods and services. The gap between gender equality continues to shrink. The idea that only men could sell beer and trucks, while women marketed cleaning products and diapers is eroding. Call today for an audition with Iris Fields and see how her sophisticated and distinct voice can boost your products and services.